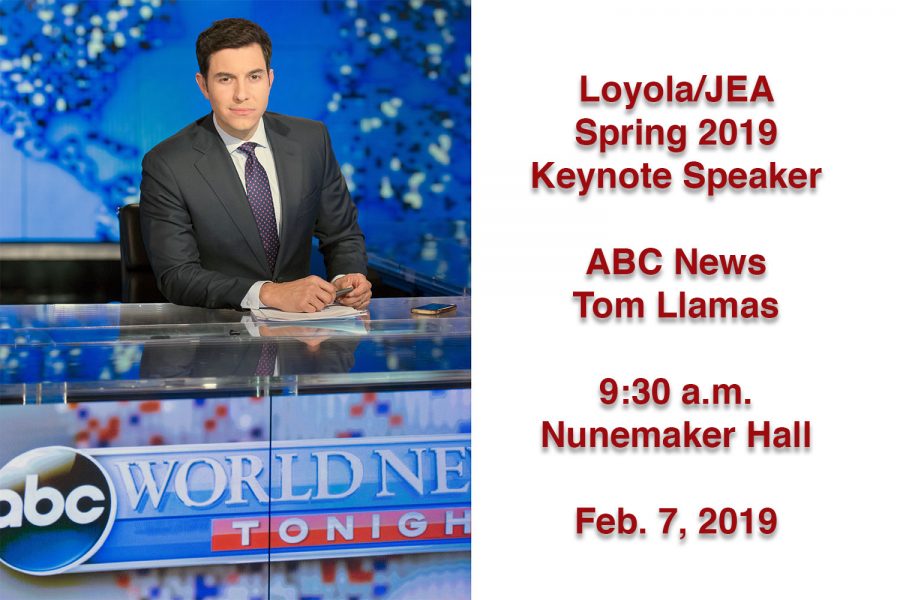 Tom Llamas will be the keynote speaker for the Spring 2019 Loyola/JEA High School Journalism Conference to be held on Thursday, Feb. 7th on the Loyola University Campus.

In 2018, Llamas secured an exclusive wide-ranging interview with First Lady Melania Trump on her first solo foreign trip as first lady. He has also covered the most important stories in recent history. Llamas anchored the network’s special reports on the death of U.S. war hero Senator John McCain, the rescue mission of the twelve Thai boys trapped in a cave, and the sentencing of Bill Cosby. He traveled to Parkland, Florida to cover the mass shooting at Marjory Stoneman Douglas High School and later to Texas for the attack inside Santa Fe High School. Llamas was part of the 20/20 team that tracked the rise of the Alt Right and their battles with Antifa demonstrators for six months culminating in the attack in Charlottesville. 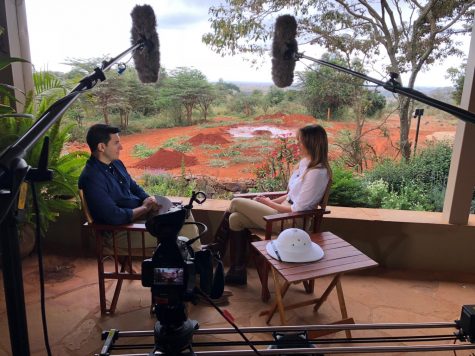 He has reported on some of the most recent natural disasters. He led the network’s coverage on the devastation after Hurricane Harvey, reported live as Hurricane Irma slammed into the west coast of Florida, covered the deadly landslides in Mocoa, Colombia and reported on Hurricane Florence from South Carolina.

He has also interviewed key figures like President Trump’s sons Donald Trump, Jr. and Eric Trump. During the 2017 Alabama Senate race he sat down with Beverly Young Nelson, one of Roy Moore’s accusers.

During the 2016 presidential race, Llamas covered the vast field of GOP candidates and Donald Trump’s successful presidential campaign for two years. His tough questions and memorable exchanges with President Donald Trump led to some of the defining moments in the election. While at ABC, he also covered the Boston Marathon Bombing trial gavel to gavel for the network and was one of ABC’s lead reporters covering the Ebola crisis. In 2015 the National Association of Hispanic Journalists awarded Llamas with the Presidential Award of Impact.

Prior to joining ABC News in 2014, Llamas was an investigative reporter and anchor of the 5 p.m. newscast at WNBC-NBC4 in New York. He also served as a contributing correspondent at NBC News. While based in New York for five years, Llamas covered a wide range of major news stories including Hurricane Sandy, the Boston Marathon Bombings, Miracle on the Hudson, the Times Square Bomb Scare and the Earthquake in Haiti. 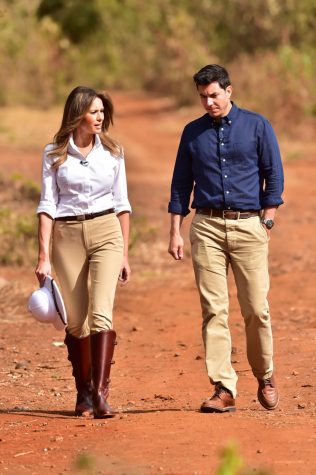 Llamas has been recognized with several awards and honors throughout his career, including Emmy awards for Best Anchor and Best Hard News Story, in 2013. In 2012, he won two regional Edward R. Murrow awards for feature and hard news reporting and was also part of the WNBC team that won the Murrow for breaking news coverage of Hurricane Sandy in 2014. Llamas was honored with the prestigious El Award by El Diario, in 2012, the country’s oldest and largest Spanish-language newspaper.

Before joining NBC4 New York in 2009, Llamas was based in Miami as a reporter for WTVJ/NBC6. From Blacksburg to report on the Virginia Tech massacre to Washington to cover Pope Benedict XVI’s 2008 trip, Llamas traveled all over the country and the Caribbean to deliver breaking news and investigative reports for the weekday newscasts. During his four years at the station, he covered eight hurricanes, most notably traveling to Biloxi when Hurricane Katrina hit the Gulf Coast.

In 2008, Llamas became the first TV journalist embedded with the Coast Guard during a human smuggling interdiction at sea. The Emmy Award-winning story documented how Cuban refugees are smuggled into the U.S. via go-fast boats and the Coast Guard’s mission to intercept these vessels.

Prior to joining WTVJ in 2005, Llamas worked for MSNBC as a political campaign reporter. Over the course of two years, Llamas traveled to over 40 states covering the Presidential campaigns of Sen. John Kerry and the Rev. Al Sharpton, and the Vice Presidential campaign of Sen. John Edwards. He shot, wrote, edited and reported live daily on the Democratic candidates for MSNBC, and contributed print reports and a daily blog for msnbc.com.

Llamas began his career in broadcasting in New York with the NBC News Specials Unit during the 2000 Presidential election and then moved to MSNBC. In his first two years at MSNBC, he worked on coverage of the September 11th attacks and the war with Afghanistan.

Llamas was born and raised in Miami after his parents fled from Cuba during the 1960s. He graduated from Loyola University in New Orleans with Bachelor of Arts degrees in both Broadcast Journalism and Drama and Speech. Llamas also completed a program at the University of Miami’s Institute for Cuban and Cuban-American Studies, which focused on Raul Castro and Cuban-American voters. He currently resides in Manhattan with his wife, two daughters and son.